Frater Perkins was an ex-marine and had an ex-marine way of doing things. A stocky man of superhuman strength and endurance, he was the most militant of the brethren- not well-liked and he didn’t give a shit. I guess that’s why the elders charged him with our corporal conditioning. He had somehow developed a bitter rivalry with former drill sergeant Frater Ignoxious M. XXX the details of which were hidden from me. Consider this: Ignoxious was, what could be termed, ‘the big cheese’ inside the Grand Neurocratic Affineur. It was these sorts of clerical personality conflicts that landed Fr. Perkins a humiliating rank demotion and the more onerous duties of the temple. Straightaway, and from the vantage point of a permanently salty mindset, he effectively embedded his vitriol in his treatment of potential recruits, Pisabytes and Neophytes.

He was the first Officer of the Temple I’d met; our introduction was singularly terrifying. But, that’s another story.

Neophytes and Pisabytes (i.e. recruits) mustered in the early evenings and waited for him to arise- deformed and surly- from his compressed hibernum: a concentrated nap after three lifetimes of nights cursing and carousing until sunrise; one night was every night. When he materialized before us in the evenings, he was in the process of shapeshifting into the cocky, immortal prick they all become after a certain hour. His musculature and hormones recalibrated, his skin tone tightened and brightened. Old-as-fuck, he could put anyone of us young ones down in a minute. The mortal Neophytes and Pisabytes were instructed to show up at Temple headquarters no earlier than 1700 hours lest they raise the ire of the elders (Fr. Ignoxious), who, while immortal, were very old and crotchety before 2300 hours when their class transmogrified. Typically they spent their days plotting, reciting their ANTIprayerz, resting and/or lounging. If we Pisabytes arrived at the graveyard too early, we assembled in the abandoned cemetery that was the Templars’ ‘yard’, mustering at a metal service ‘shack’ to peel potatoes until our drill instructor arrived. The insanely large spuds were in hundred pound sacks stacked behind an impenetrable jumble of grotesque alien tools. There were hundreds of pounds of potatoes. The Templars loved potatoes.

The night time routines lasted for six months. A shift in hours and approach followed.

During those evening PT blocks, Fr. Perkins stood over us in the Templar’s Hippodrome, blinding banks of heated light illuminating our surroundings as if it were high noon, driving us by lash through sand pits some with flat slabs of stone others with V shovels tethered to our waists, churning up sand at peak pace. We tilled and smoothed, stones and shovels, in endless cycles.

Historically, PT wasn’t scheduled during peak sun hours, and the Neophytes and Pisabytes usually found themselves uttering wordless, thankful ANTIprayerz to whomever was responsible for the Templars sleeping the day away. But, Frater Perkins changed all of that; he was a ‘Day Buzzard’, as the other Templars called him.

When Fr. Perkins began the ante meridian cycle, he chose particularly nasty days, environmentally speaking, to drill us relentlessly on the crumbling blacktop of a parking lot situated a mile- and an obstacle course of machinery, trash, brush and briar- from Cemetery Shores. Humidity coupled with poor air quality assures a punishing outdoor workout for the day. It’s like you’re breathing under stagnant water. He stalked between us chain smoking L & M’s, barking orders and invective. It was daytime, so his appearance took on that of an enormous ogre, a prehistoric simian with australopithecine features. His smell was fouler than foul and his breath could melt a tablespoon.

He ran us along Glandflower Road until we reached Route 60.

“You think when the apocalypse comes… when Ess Aytch Tee Eff… it’s gonna be comfortable, pussy-boys?” He boomed- spit flying in testosteronic party streamers from his huge, rank mouth. “You think th’ poison in the air is comfortable? You can’t hiiiiiiiiiide from it. Do ya think yer gonna be runnin’ fer yer life in some candy-ass, climate-controlled environment that smells like mother-fuck-ing Glade Plug-Ins? DO YA? NO! The ground an’ the sky gonna open up an’ you’re gonna be dodgin’ fallout, burning cinders and bouncin’ offa sinkholes, garbage bombs. You gotta suck it up, dipshits! Now, drop an’ gimme sixty. WHADDAYA WAITIN FOR YA CUNT TURDS?!”

“YESSIR.” We all said and dropped.
“All the way down, kissin’ the concrete. Just pretend ya bobbin’ onna dick.” The pavement was scorching hot: condiment smeared, strewn with broken glass; I cut my hand as I landed. Fr. Perkins kicked a rather large recruit between his legs from behind. “I want you frenchin’ that lot like you’re fitten to fuck it, then I want you to fuck it all the way to sixty.” As if reading my thoughts, his head whirls. I feel his eyes, hot, a solar flare scorching the side of my face. He steps to me using the backs of the other recruits like stepping stones across a broiling onyx river. “I see how you’re lookin’ at me! You shit! Don’t even think about it. I C’D GIVE A THREE-FISTED-FUCK IF YOU LIKE ME! AT ALL! I’M NOT ON THIS EARTH TO MAKE FRIENDS, MUSHROOM-TIP!”

He’s standing over me and I feel the spray of his mouth on my back. On the softened tarmac, in my line of sight, there’s mushed hamburger bun (?) dissolving to sludge that smells like regurgitated fair food. These sun-roasted odors mingled with tar and waste, overlaid with heavy notes of rancid ketchup, queased my stomach and I, much to the dismay of all, retched and blew a few squirts out of my nose. THAT’S IT.

“That’s fifty more, honyoks! You can thank this little cunt here.” He punctuates this acknowledgement with a kick to my crotch from behind. He likes that move. I retch another ochre stream from the pain that radiates from my balls to my stomach to my lungs. We get twenty five more because, as he puts it, my ‘pussy can’t stop draining’.

Now… I’m ready to get up… coldclock this guy and just take off. Higgally piggally. This is the top secret satanic group everyone’s talking about? Everyone being the news media and the dudes under the bridge. The dudes under the bridge- the ranks of which I have been and am now again part of- are really familiar with the Templars as they often work together in alliance. Mostly. Am I cautiously optimistic?

He’s pacing between us, kicking us in the crotch or pushing us down foot between shoulder blades, if we aren’t maintaining proper form. None of us have achieved his ideal. It’s all part of the game. Long before I was here, I was in the military. It only took two months before I went AWOL. I hitch-hiked back to my birthplace: Akron, Ohio. I needed the ultimate ‘dumb nowhere’ to sort myself out. Little did I know, I was already adopting a basic Neurotic tenet, ripening myself for the Templars’ factory farming of my personality to become the persona writing this. A Homosin. A bad omen on three legs.

“Ya gotta build up them toxins in yer system. Ya gotta be a TOXIC AVENGER. Ya gotta push the bullshit inta yer pores and openin’s. This is the only wayta overcome itall. Er die tryin’. ARE YER BELIEFS SO REAL YER READY TO DIE FOR ‘EM YET?”

I grunted, softly, as I pushed through the exercise. My arms burned and I struggled past the next set of pushups, but when I finally collapsed in the happy meals, glass and shit of the lot, Frater Perkins came over and picked me up in his wooly, tree-trunk arms and, with one toss, hefted and threw me into a nearby dumpster.

“Ya heard-a muscle confusion? Well, try WHOLE SYSTEM CONFUSION! Keep the body and mind guessin’ an’ primed for what’ll happen next. This is the key to either sharpness or disillusionment… and, either way, YOU WIN!”

If you subject yourself to something on repeat, it just sinks into your subconscious and there you have it. I WILL win, I said to myself as I peeled a congealed stickiness of styrene off my face.  I will win AND die trying.’ 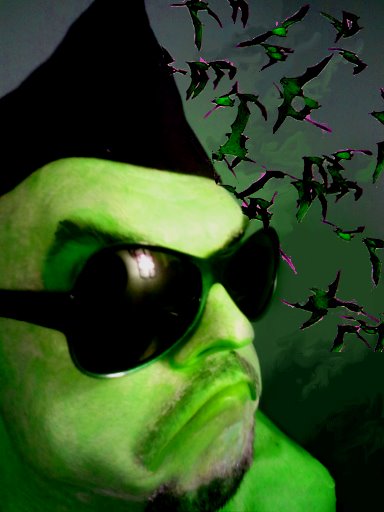